Things have been dead around here since the draft, and it's partly my fault. Every time I sat down to write a post, whether it was on Beasley's latesy off-court mishap, or even a post about redemption stories amongst the NBA in the past, and for the future, I got too down having to write "if we have a season" at least once every paragraph.

With all this lock-out nonsense seeming just as far from resolved as ever, I'm going to go on hiatus until the NCAA season is closer to recommencing, or the NBA lock-out is resolved. Until then, I'll keep posting links to my lock-out beard photos on facebook (50+ days and still going strong), and hoping against hope that all this summer ball players are playing will remind them what it's really about; the game, and will soften their stance somewhat.

Posted by hardwoodlife at Sunday, August 21, 2011 No comments:

What doesn't kill me can only make me stronger... to a point.

As if the challenges facing NBA athletes looking to become all-time greats aren't great enough already, that little truth called injury often rears its head to bar the way to greatness. Now, there are two sorts of injuries; chronic injuries, and freak injuries. While chronic injuries are by far the more frequent, the old adage "what doesn't kill me can only make me stronger" has some merit in relation to freak injuries. Often times, a once off, severe injury can have a positive impact on a player's career.

Take a look at Michael Jordan; in his first season, MJ was on top of the world, killing it on and off the court, and whilst he was already competitive, it took a season more or less missed on the sidelines in his sophomore campaign for MJ to really appreciate the game, and develop that hunger to win. As we know, this injury was a once off, and the time he spent on the bench didn't just cause a rift with management who were trying to limit his minutes, but also kindled the rage within him at his own impotence in the face of injury which carried him until his first retirement. I believe it's healthy for a player who's extremely physically gifted like Mike was to learn early on that his body can fail him, and to give him a look at basketball from afar to see whether it's just a job or a way of life. Of course, it's easy to point at someone like Michael Jordan and say, this aspect of his career is why he was successful, but there have been other examples of players who had a one-time injury who came back stronger, and hungrier.

Which brings me to my next example, Blake Griffin. Yes, he's only just completed his rookie season after red-shirting for a year, but what a rookie season. When you watch Blake on the court, you notice his dunks; but his relentless energy on both ends and hunger for the ball are more impressive. The guy just never stops working. It's not hard to point to a year spent on the sidelines, learning the game without playing it, yearning to step back onto the hardwood as a prime motivator in Blake's energy, especially on a team like the Clippers. Thankfully, his injury isn't due to a chronic problem, and was a freak accident.

My final example is Dwyane Wade. Having already won a ring and Finals MVP, it would have been easy to point to Wade as a player who could rest on his laurels somewhat. However, losing the 07-08 season to injury was a blessing in disguise. Wade came back with a vengeance, and his determination to prove he hadn't lost a step took him to greater heights than ever before, with Dwyane taking home his first scoring title. Today, he's arguably the best scorer in the game, and some (myself included) would say the best player period. Once again, a single serious injury can reinvigorate a basketball player and take him to new heights, and there are other examples out there.

If Michael, Blake and Dwyane benefited from a once-off injury to serve as a motivator, there are countless others who have been beaten down by injury one too many times and lost that aggression, that instinct, which is why having your player go down for an injury can be beneficial, a constant stream of nagging injuries can completely break them.

Posted by hardwoodlife at Sunday, August 14, 2011 No comments: 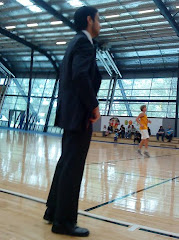 hardwoodlife
Western Australia, Australia
I've been involved in hoops since I was seven years old, and I'm working my way back from playing after a raft of injuries, including a tibial stress fracture a few years back, and most recently, surgery to repair a torn ligament in my thumb and having a pin inserted in my foot. I have coached teams aged 13 to 17 for five years, but have put it on hold for the moment. My biggest regret is that I never got to see Jordan in his prime. My favourite active player is Rajon Rondo and my team is the Boston Celtics because I love their team-first attitude and old-school mentality. I hope to one day see the Jordan statue in Chicago in person, and to find a way to make the sport I love my career someday. I am currently working as a journalist for the South Western Times newspaper in Bunbury, Western Australia.